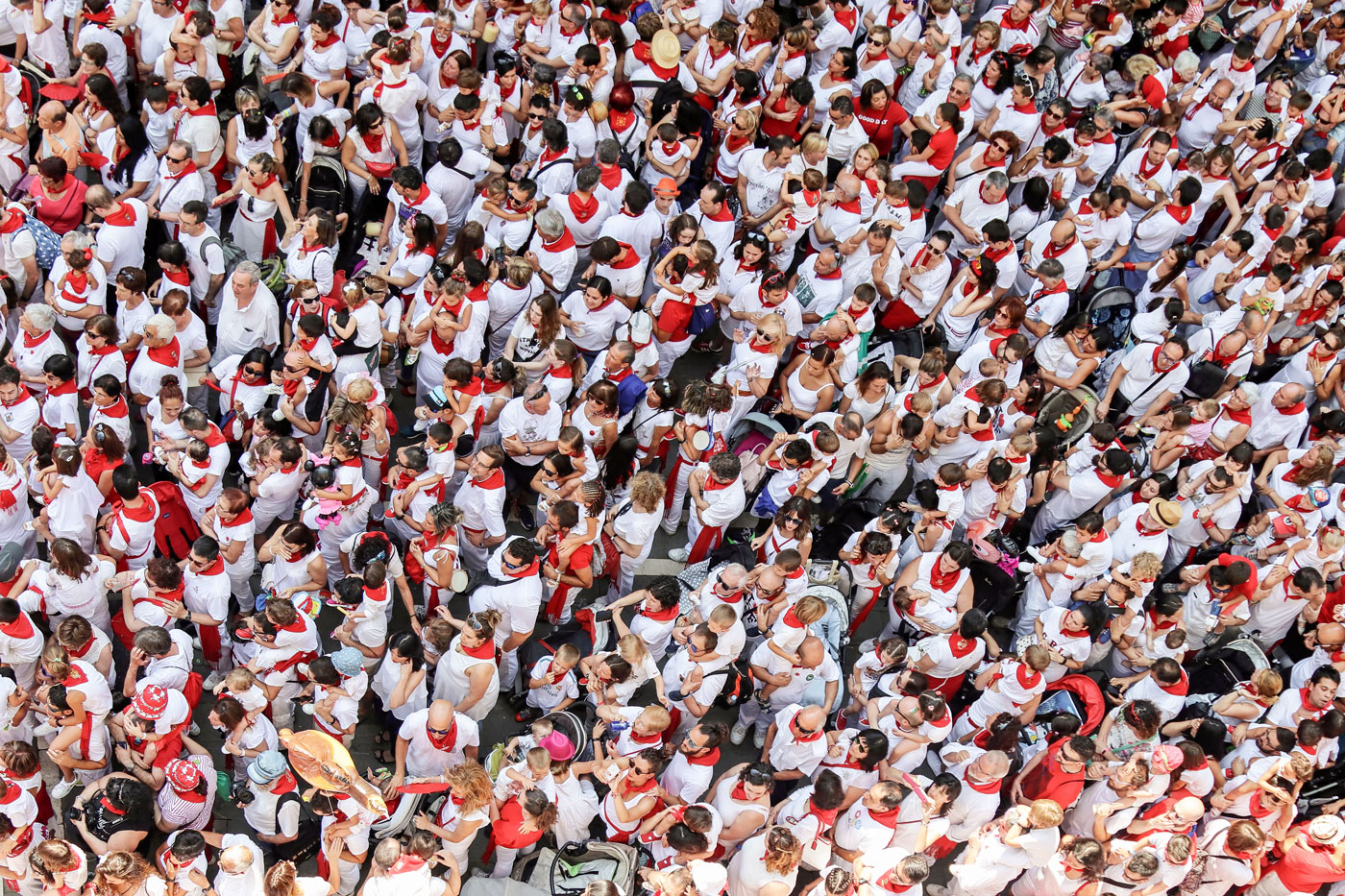 I signed up the very day I heard about YouTube Director Onsite (YDO) to see if it was an experience I’d recommend to our clients. It was a very interesting process and one that I decided I’d like to share with everyone.

In this post I’ll explain what YouTube Director Onsite is and isn’t. I’ll then run through the whole process: signing up, writing the script, filming, editing, setting up the AdWords account, and finally seeing the results.

But let’s cut to the chase—here’s the final video. I’ll let you be the judge of its quality.

Clearly I’m no Bogart. However, I don’t think you can fault the Google Director Onsite system for my lack of acting skill. On the whole, I’m pleased with the outcome of the video.

Let’s dive in and see how it was made. But first…what is this Google Director Onsite thingy anyway?

This is a typical TrueView ad (except it’s a bit long at 3:09), which is skippable after five seconds. Google knows I’m over 50 years old and they are certain I want bulging biceps and ripped abs. Apparently I have to exercise to make that happen.[/caption]

YouTube Director Onsite is a system created by Google that partners a business (you) with an actual live, human director to create a video ad, free of charge; they only require that you spend $150 on ad spend promoting the video.

You might want to reread that last part. Google gives you a video director and editor. The only compensation they ask is that you spend $150 to have people watch your video ad. Not a bad deal.

You can use the video as a preroll video ad or a TrueView ad. What are they and how are they different? Basically, preroll videos are of different lengths and cannot be skipped. TrueView are the normal skippable ads you’ve likely grown used to. There are other subtleties between them—here’s a good article on the topic—but that’s the gist.

Before you can get started, you have to answer a simple question—do they offer YouTube Director Onsite where I am? If you aren’t in the center of just a few major cities, it’s likely you can’t take advantage of YDO yet.

We are located in Chicago, so we had no problem with this step. We did a little experimenting to see if we could recommend YouTube Director Onsite to some of our suburban clients and found that they were out of range. One client was only 5 miles from the city, and YouTube Director Onsite said, “Nope!” to their zip code. Your business will have to be in the center of one of these seven cities to qualify.

Next, you sign into your Google account or create a new one. Then fill out a contact form and answer a couple of basic questions. Do you…

When I selected “No” to the first two questions nothing changed. I was expecting they’d want me to sign up for those accounts, but the system didn’t go in that direction.

Next you’ll have to give the yet-to-be-named human director three options over the next couple of weeks of when they can give you a call.

First, you watch video examples of each type of template. We recommend you study them carefully. You’ll see that there are videos for different types of businesses and styles. I watched all of the videos and ended up deciding to go with the “Pro Tip” template. I went this route because most of our interactions with potential clients are trying to explain the basics of SEO.

Selecting that template triggered a questionnaire. I was asked four questions that were clearly related to what the video’s content would be. I later learned that the questionnaire was filling in a Google Sheet (see below) that would act as the collaboration tool between the director and I to write the script. The questions were designed to begin telling the story of the video.

Once I filled out the form, I was told the process was underway and I’d hear from my director shortly to schedule the 30-minute introductory call. I immediately got an email summarizing everything I’d just done and there was a bright shiny button that begged clicking:

I clicked the button and was taken to a Google Sheet that had my answers to the template questions related to a “Shot” in the video. The spreadsheet even estimated how long the shot would be. The red background indicated my answer was a bit too verbose and would need some trimming. 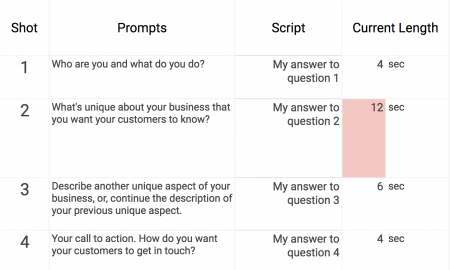 I had other things I had to get done, so I tucked this away and awaited hearing from my director.

Hash Out a Script Over the Phone with the Director

I got a calendar invite shortly after that from the director, Johnny. The invite was to the introductory call, and the time scheduled was 45 minutes, not the advertised 30 minutes. That made me think this wasn’t going to be just a “Hello” call.

We both pulled up the script and Johnny began running me through his thoughts. In the Google Sheet, we could see each other editing while we talked. We bounced ideas off each other and played with the length of the script. Our goal was to get a 22 second video so we’d have time for an intro and call-to-action. The 45 minutes went by and became 50 minutes when we finally agreed we had something useful. Johnny told me to show it to other people in the office and continue to refine the message before arranging to meet the next week to go over the script one more time.

After one more quick revision phone call, we had our final script. A time was agreed upon for Johnny to come the following week, and then like any good director, he told me to study my lines.

Johnny showed up right on time at 1:00. He told me that we’d spend about 1.5 to 2 hours setting up and filming, then he’d settle into one of our desks and do the final editing of the video. By 5:00pm we’d have the final video.

Johnny surveyed the office, played with the blinds, asked for a variety of chairs and stools, and selected the spot where I was to sit. He adjusted items in the background, aligning them so what was behind me was interesting, but not distracting. He put his Canon on a tripod, pinned a wireless mic to my lapel that connected to his iPhone, and we were off to the races.

Just as I was about to start trying to say my lines, Johnny let me know I’d selected the hardest template. All the other templates had shots of other things (products, offices, people in meetings, etc) and just a voiceover. Recording voiceovers is a lot easier than being a talking head saying a script. Lovely…I wish someone had warned me earlier.

After what seemed like hours and hours of do-overs—but was actually about 45 minutes—we had the take we needed.

After some voiceover work for the intro and call-to-action parts of the video, Johnny dismissed me, grabbed his Macbook Pro, the camera, his phone and retreated to one of our desks. He spent the next hour hunched over his computer editing the video. In what seemed like a very short time he called me over to take a look at the final product.

The whole office joined me to watch my premier. The guy in the video (me) didn’t really seem to have much charisma—doesn’t everyone hate how they look on camera?—but everyone in the office was very complimentary (I think the fact that I sign their paychecks might have something to do with their approval).

Johnny packed up and was out the door 3.5 hours after he arrived.

Next, I was put in touch with Alex, a PPC expert working at Google. We had a preliminary call where he told me about the strategy he was thinking for the account. I gave him written permission to work inside of our AdWords account, and he set up two campaigns: one for Remarketing and one general campaign so we could control budgets a bit better.

We talked strategy and decided in the general campaign we’d have two ad groups: one based on custom affinity audiences Alex would set up related to people looking for important keywords related to our business. The other ad group was based on an in-market audience around people interested in purchasing digital marketing services.

We set the budgets to $15/day and set the campaign to run for ten days to spend the $150 I had agreed to.

The video was better than I expected. You’ve seen it…what do you think? I’m not going to quit my day job and move to Hollywood (maybe Bollywood?). I was pleased with the quality of the recording and the sound was really quite good. I was disappointed in my overly serious tone, but there’s always next time.

Our director, Johnny, was amazing. He made it possible for me to sit in front of a camera and get 22 seconds of memorized text out of my mouth. I’d never have been able to do it without his encouragement and the context he gave me (he assured me that I wasn’t the first person to suck!)

Alex was also very, very professional and very good at his job. I know how to set up AdWords accounts, so I could follow what was going on. However, I could tell that he’d be able to bring his his talk down to a level those who have never set up an ad group could understand.

On the whole, I was very glad I did it and I felt pleased with the results.

And here are the general results:

Will I Recommend YouTube Director Onsite to Our Clients?

Yes, I already have! We are waiting to see the video for Swift Passport Services. Without a doubt I will recommend this to all of our AdWords clients in any of the seven cities that YouTube Director Onsite covers. It’s a comfortable experience and a ridiculously low cost that yields a good video that does the job—putting our brand in front of people looking for our services.

You might be asking, why on earth would Google do all of this for $150? It clearly costs them more than $150 to produce the video.

Well, if we are any indication, they will make more than $150 from the ads. I intend to run the ads for at least another month to allow us to test the conversion rate a bit more. That will likely yield Google another $600. 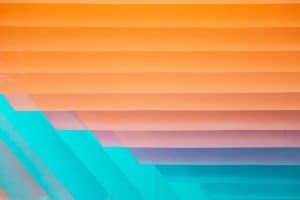 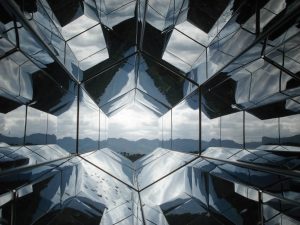 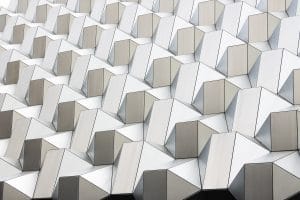